Cystic Fibrosis (CF) or Mucoviscidosis is an inherited condition. In cystic fibrosis transmembrane conductance regulator (CFTR) protein does not functions properly i.e regulation of fluids and salts outside the cells. Cystic fibrosis affects exocrine glands eg., the mucus-secreting and sweat glands in the respiratory and digestive systems. The frequency of common mutation F508del (deletion of phenylalanine residue at position 508) in children is between 19% and 34%. The estimate frequency of CF as 1:10,000 to 1:40,000 in children. There is no cure for cystic fibrosis, but treatment can reduce symptoms and complications to improve quality of life. Close monitoring and early, aggressive intervention is recommended to slow the progression of CF, which can lead to possible longer life.

Cystic fibrosis is a genetic, autosomal recessive disease that involves different organ systems with particular damage occurring to the respiratory and gastrointestinal tracts.1, 2 The most common mutation worldwide, found in approximately 66% of patients with CF, is a class II mutation caused by a deletion of phenylalanine in position 508 (F508del) of CFTR. F508del CFTR is misfolded and trapped in the endoplasmic reticulum (ER) and subsequently proteolytically degraded. 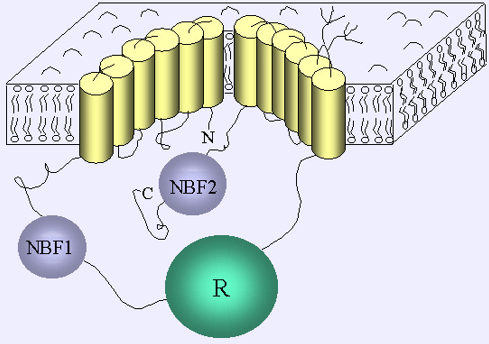 The gene that encodes the CFTR protein, which is called CFTR, is located on chromosome 7. Mutations in this gene lead to CF. CFTR's soluble domains, which include two nucleotide binding domains (NBF1 and NBF2) and a regulatory domain (R). The cystic fibrosis transmembrane conductance regulator (CFTR) is defective in cystic fibrosis (CF). The CFTR gene provides instructions for making a protein called the cystic fibrosis transmembrane conductance regulator. This protein functions as a channel across the membrane of cells that produce mucus, sweat, saliva, tears, and digestive enzymes. The channel transports negatively charged particles called chloride ions into and out of cells.

Pancreatic insufficiency is the most common gastrointestinal complication of cystic fibrosis (CF), affecting approximately 85 percent of patients at some time in their lives. In rare cases, cystic fibrosis can manifest itself as a coagulation disorder.4

CF lung may be attributed to endogenously increased levels of proinflammatory cytokines such as tumor necrosis factor alpha (TNF-α), interleukin 8 (IL-8), and IL-1 (According to some reports, the levels of these cytokines may be altered in CF subjects even before a bacterial infection can be documented. Intriguingly, reduced levels of the anti-inflammatory cytokine IL-10 have been recently reported in CF patients. Chronic bacterial airway infections are characteristically seen in the majority of individuals with CF. These infections are commonly polymicrobial and rarely can be eradicated with antimicrobial treatment.6, 7 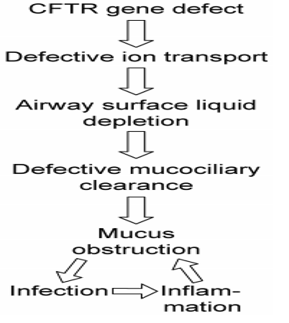 Sweat chloride: 60 mmol/l is considered diagnostic of CF. Values of sweat chloride of 40– 60 mmol/l are considered highly suggestive of CF. Patients with CF usually have a sweat sodium: chloride ratio > 1. DNA testing for the more common CF transmembrane regulator (CFTR) mutations is a valuable diagnostic test. The identification of increased immunoreactive trypsinogen (IRT) levels in the blood of infants with CF has made neonatal screening for CF possible. Trypsinogen is one of the secretory products of the pancreas making its level in the blood a specific marker of pancreatic function. Immunoreactive Trypsinogen (IRT) ≥ 120 ng/mL is confirmatory8

Antibiotics are prescribed. These mainly consist of inhaled forms of azithromycin, tobramycin, aztreonam and levofloxacin. Other antibiotics recommended are ciprofloxacin, cephalexin, amoxicillin and doxycycline depending on the sensitivity pattern.

Aztreonam inhalation solution is an alternative antibiotic for patients with chronic colonization of P aeruginosa. Aztreonam 75 mg is administered by nebulization route three times daily for 28 days on and then 28 days off.

For chronic use, Tobramycin is administered by nebulization (300 mg) or dry powder inhalation (112 mg) twice daily for 28 days on and 28 days off.

The treatment of multidrug-resistant gram-negative bacteria in patients with CF with advanced lung disease is challenging given the intrinsic resistance of these organisms to antimicrobials of several different classes.

The main functions of enzymes are to:

Oral corticosteroids at a Prednisolone equivalent dose of 1-2 mg/kg alternate days appear to slow the progression of lung disease in CF but this benefit needs to be weighed against the occurrence of adverse events, in particular, development of cataracts and effect on linear growth.9, 10

Megestrol acetate (MA) has been used in several controlled studies. MA 40-80mg seems to facilitate significant weight gain in treatment subjects. It has been successfully used in patients with CF who have failed conventional nutrition interventions. Appetite improvement is reported with significant weight gain consisting of both fat mass and lean body mass11

There are four CFTR modulators for population with CFTR mutations:

The yearly cost CFTR group is expensive with some benefits.12, 13, 14 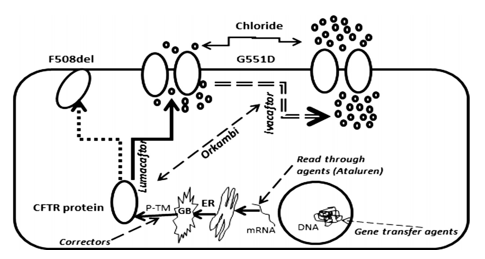 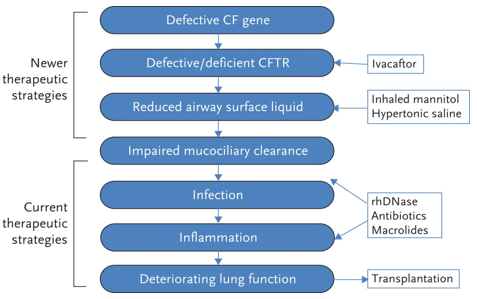 Airway clearance techniques — also called chest physical therapy (CPT) can relieve mucus obstruction and help to reduce infection and inflammation in the airways. These techniques loosen the thick mucus in the lungs, making it easier to cough up.

800mg dose of Andecaliximab binds to MMP9 at the junction between the propeptide and catalytic domains, distal to the active site, and acts by preventing the activation of inactive zymogen. It is under advanced stages phase III trial and expected to reduce inflammation and improve lung function. Side effects reported were anemia (20%), DIC, fatigue, anorexia, hypoglycemia, cholangitis, AST elevation and neutropenia. 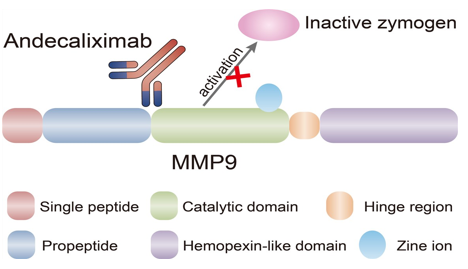 Result in improved function of the CFTR protein as a chloride channel, moving salt and fluids in and out of cells. Side effects reported were headache, dizziness, indigestion, swelling of your hands, legs, feet, and ankles (peripheral edema), nausea, diarrhea, and vomiting.

Was developed for potential treatment of nonsense-mutation cystic fibrosis (CF). Trial results are not very encouraging. Ataluren is taken three times a day, and the recommended dose is 10 mg/kg (10 mg per kilogram body weight) in the morning, 10 mg/kg at midday and 20 mg/kg in the evening (for a total daily dose of 40 mg/kg). Granules (125, 250 and 1,000 mg) are available. Side effects of ataluren include vomiting, nausea, headaches, stomach aches, and flatulence.

Tezacaftor in combination with ivacaftor

The combination of tezacaftor and ivacaftor was efficacious and safe in patients 12 years of age or older who had cystic fibrosis and were homozygous for the CFTR Phe508del mutation. 9, 10, 11, 12, 13, 14, 15 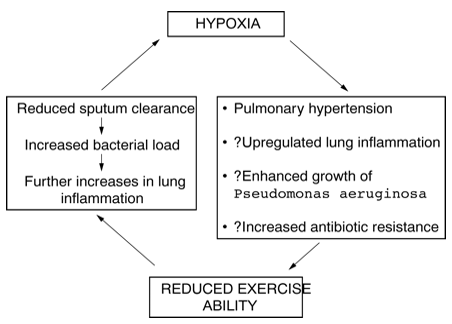 People with cystic fibrosis (CF) suffer from breathing problems. Giving additional oxygen has long been a standard of care for people with chronic lung diseases. Participants receiving oxygen therapy were able to exercise for a significantly longer duration during exercise. Often, patients who need oxygen therapy for 15 hours or more use a large oxygen tanks. High-flow nasal cannula oxygen therapy (HFOT). Is an oxygen technique offering greater comfort and more efficient oxygenation than standard oxygen HFOT is increasingly used, particularly in patients with acute hypoxemic respiratory failure. A large randomized controlled trial has found that mortality of patients with acute hypoxemic respiratory failure was lower when they were treated with HFOT than with standard oxygen.17, 18