A community evaluative cross-sectional study was undertaken from patients attending two selected dental clinics of Gurugram to record public awareness regarding Dental implants. The patients agreeing to participate in the interview, through predesigned and pre tested proformas were included. Patients were requested for using a closed ended dichotomized questionnaire by 140 patients during their exit from the clinics from 9 AM to 12 noon period. Since the average patient load in dental clinics were not too crowding; the total coverage of the sample was time consuming. While 63% did not have much information regarding dental implants which can be used to replace missing teeth; only 14% wanted more information regarding implants and 39% were attending the clinic to know about dental implants through dentist. The major difference between Dental Implant and Root Canal Treatment (RCT) was not clear to people.

Dental implants were used for the first time in 1950 as a treatment option for missing teeth.1 In the present days due to changing dietary habits and different types of tobacco consumption, people are more prone to dental caries or damage. Dental caries is an infectious microbiologic disease of the teeth that results in localized dissolution and destruction of calcified tissues. Dental implants can be offered to both edentulous and partially dentulous patients with appreciable improvement in the dental condition. Now a days dental implants are widely used due to esthetically and functionally promising results as a treatment option for missing teeth.2 But sometimes dentists face problems in providing ideal esthetics and functional ability to the patients due to their rising expectations from dental implants.

Dental implant is considered as the best treatment option for missing teeth with excellent prognosis.3 Nevertheless, the knowledge and the difference between Root Canal Technique (RCT) and Implant is not clearly understood by the community at large; which increase their expectations as well as need based therapy in dental morbidity. It was therefore decided to study the awareness of the clinic-exit patients towards dental implants. It was believed, the patients coming to the Dental clinic have some knowledge about RCT/ Implant. Most frequently than not, dental implants are more popular among people belonging to higher socio-economic status, particularly for esthetic causes than any problem.

A cross-sectional study was collected from Two dental clinic attendees. They were subjected to the study with their consent to be included in the study. It was a knowledge assessment process without any intervention, therefore ethical clearance was not needed. A predesigned closed ended questionnaire was processed to study on 140 patients visiting two private dental clinics in Gurugram. The self-administered questionnaire was written in both Hindi and English. The questionnaire was pre-validated by the subjects. The statistical analysis was done using descriptive and inferential statistics (χ2-test) and software used was Statistical Package of Social Sciences (SPSS) version 22. P and value less than 0.05 was considered as statistically significant.

The study was explained and the questionnaire was distributed to the patient who were willing to participate in the study. The subjects who were above 18 years of age, agreed to participate in the study as well as able to study the proforma were included as the study sample. It was a small proforma, hence those who could not fill the proforma were excluded.

The study showed that the patients were not having clear knowledge and awareness regarding dental implants. The present study was carried out to evaluate the knowledge of the dental patients towards dental implants in Gurugram. Around 1 million implants were inserted in the world in one year.4 But still most of the population are not aware of implants as a treatment option to missing teeth and its success in smoothening the eating as well as facial appearance.

In the present around 37% of the patients were aware of dental implants and 63% of the patients have no knowledge regarding dental implants and this finding was statistically not significant (p>0.05). However, study conducted by Zimmer et al.5 in 1992 showed that 77% people were aware of dental implants. Similar studies conducted by Berge6 in 2000 and Tepper et al.7 in 2003 showed that around 70.1% and 72% participants were aware of dental implants as a treatment option which was because of the fact that these studies were undertaken in developing countries where the health awareness is higher than India. In the present study 120(86%) wanted more information regarding implant. This observation was statistically highly significant (p<0.001). A total of 31% of the participants came to know about implants through their relatives and friends while 61% of the patients came across dental implants through their dentists. These information were statistically not significant (p>0.05). This is in accordance with the study conducted by Chowdhary et al.,8 Muktesh et al.9 and Ravi Kumar et al.10 where dentist introduced dental implants as a treatment modality of missing teeth. However, this parameter of our study was not in accordance with the study conducted in United States of America where media was the main source.6 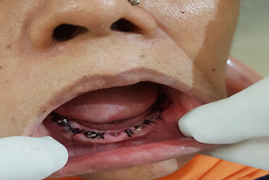 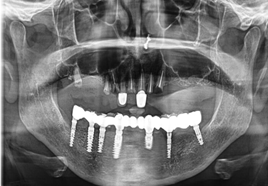 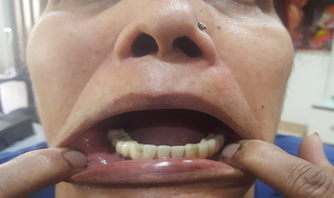 From the present study and literature, it is observed that both dentists and multimedia are important to create awareness of dental implants among general population. Some patients, photographs, as shown below, may also be attached to the educational material to be prepared by public health dentistry expert so that the educational campaign may be more effective. Since surgical procedure is involved during the placement of implant for people and also the dentists with respect to their knowledge and skill particularly regarding healing, osseointegration and prosthetic techniques involved and complications of peri-implant tissue after surgery.

Appropriate interventions are required to create knowledge and awareness of dental implants as a treatment option of missing teeth among patients. However, it can’t be too emphatically stated that the affordability will be easier for the simple reason that it is an excellent procedure with gainfull output but equally expensive. As can be seen from the patient in the above pictures the procedure has to undergo three major procedure as preparation, implant with screw and capping, thus it needs the proper skill of the health care provider, the financial arrangement of the procedure by the acceptor. However, 93% (p<0.001) of the respondents agreed to go for implant after they were shown the pictures and explained the procedures involved. This could be a method for public health dentistry personnel to disseminate the knowledge. Thus, it is the need of the hour to educate people to choose dental implants as a treatment modality for missing teeth keeping in mind their excellent prognosis. Dentists can play an important role to encourage people to go for dental implants.

The authors declare that there is no conflict of interest.