Oli, Mishra, Srivastava, Mishra, and Brighten: Study of incidence of heart failure in COPD exacerbation- A study in north India

Rationale: Progression of chronic obstructive pulmonary disease has a considerable effect on heart function including pulmonary hypertension, cor-pulmonale, Right and Left sided heart dysfunction. As COPD and heart failure (HF) share a common clinical feature, delay in diagnosis is associated with increased mortality. We aimed to study the incidence of heart failure in patients with COPD exacerbation.

Materials and Methods: 142 patients were enrolled for study. It is a cross-sectional comparative study. We categorized exacerbation into two groups: respiratory failure and non-failure group. Patients were staged by spirometry after stabilization. Echocardigraphic evaluation and BNP levels were measured along with routine investigations.

Result: The mean age of the study group was 63.53±9.021. The overall incidence of heart failure in exacerbation of COPD patients in our study group was 33.09%(n=47). Incidence of HF was 50.6%(n=41) patients in the respiratory failure group and 9.8%(n=6) in non-respiratory failure group respectively. Right sided heart failure was recorded in 82.92% of case in group one whereas in group two 66.66% had left ventricular dysfunction.

Chronic obstructive pulmonary disease is a major public health problem that has high prevalence and chronicity which affects around 329 million people worldwide and is the third leading cause of death.1 In India it is estimated that 30 million people are suffering from COPD and has the highest mortality in the world, data suggests that about 556,000, i.e. (>20%) of total 2,748,000 die in India annually.2, 3 The major risk factor for COPD is smoking. It is responsible for 40% to 70% of COPD cases. Globally, 84% of smokers live in developing and transitional economy countries.4 COPD along with accompanying cardiac disease are common due to shared risk factors like aging, cigarette smoke, inactivity, low-grade pulmonary and systemic inflammation.

COPD is frequently accountable for delayed diagnosis of HF and vice versabecause they both have similar clinical feature such as dyspnea and poor exercise tolerance.

To study the incidence of heart failure in patients with COPD exacerbation.

Our study is a cross-sectional comparative study. In the group 1 patient with exacerbation of COPD with respiratory failure as per Gold Initiative for Obstructive Lung Disease guidelines.1 The study was conducted in Sir Sundarlal hospital, Banaras Hindu University (BHU), Varanasi from August 2018 to July 2020. Approval of the ethical committee was obtained in July 2018.

Adult aged >40 years with diagnosis of COPD as per GOLD guidelines,

In total 142 patients were enrolled for this study. 81 patients in respiratory failure group and 61 patients in non-respiratory failure group. The study was planned to include 100 patients in each group however due to pandemic and time limit we had to conclude our study. During hospital admission all patients were treated with standard protocol including oxygen support, oral or intravenous antibiotics and oral or intravenous steroids as recommended by treating physician. Non-invasive ventilation and Invasive ventilation were done whenever mandated and possible. Patients with NIV were shifted to High dependency Unit (HDU). Patients with heart failure were treated as per standard guidelines. Patients were ventilated with Phillips Respironics using oro-nasal mask. The ventilator settings that were used are: BiPAP, S/T, AVAPS mode with an IPAP min/max 16/30 cm H2O,EPAP 6-8 cm H2O, respiratory backup rate was 16/min, target volume of 5-7 ml/kg. Adjustment of these parameters were done on the basis of ABG analysis, oximetry, patients tolerance, patient ventilator synchrony as per our protocol.

NIV was initially administered as long as necessary to maintain pH ≥ 7.35, followed by gradual decrease over time. Initial ABG was done immediately after admission in Chest Ward following standard guidelines. Repeat ABG was done and clinical parameters were re-assessed as per our hospital protocol. BNP levels were measured at the time of admission. A complete workup including 2D-Echo was done.

2D-echocardiography was done by a multi-frequency probe with a range of 2-4.3 MHz both 2D and M-mode studies were done. Echo was done to review the pericardium, valvular anatomy and function, both sided chamber size and cardiac function.

In our study the mean age of the study group was 64.02±9.97 in the respiratory failure group and 62.87±7.60 in the non-failure group. There was almost equal distribution based on gender.

Incidence of heart failure among the study groups 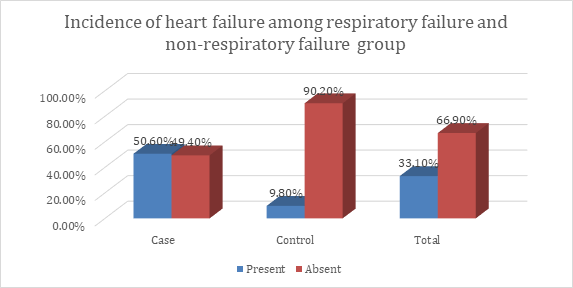 Incidence of shared risk factor for both COPD and heart failure

Our study shows that overall incidence of heart failure was more common in COPD exacerbation with respiratory failure compared to non-failure group.

In our study the overall incidence of heart failure in COPD exacerbation was 33.09%(n=47). However individually in between groups respiratory failure group and non-failure group was 50.6%(n=41), 9.8%(n=6) respectively.

Another study by Kawut SM et al.9 in hospitalized patients with moderate/severe COPD, 48% demonstrated abnormality of RV structure/function, with RV enlargement being the most common (29.9%). Our findings are consistent with increased right heart failure in severe exacerbation with RF. RV failure confers a poor prognosis in COPD.10, 11

In our study the incidence of HTN, DM and CAD was 12.34%, 27.16%, 9.87% respectively in the respiratory failure group whereas in the non respiratory failure group the incidence was 19.67%, 26.22% and 9.83% respectively. In a study conducted in Spain by Almagro et al.12 (2010) they found that 55% of the patients had hypertension, 26% diabetes mellitus, 27% chronic heart failure, and 17% ischemic heart disease. Female COPD patients had a lower prevalence of ischemic heart disease. However in our study there was no gender disparity. Another study done by Baty et al.,13 (2013) they found that prevalence of HF, IHD, Arrythmias was 11%,25% and 13% respectively they also concluded that co-morbities were associated with worst outcome.

The limitations of our study was a small sample size and also we were not able to perform right heart catheterization or Transesophageal echocardiography. However the results are encouraging.