India is fast catching on, to be the world’s capital for Diabetes. With this, comes the burden of setting, and maintaining glycemic goals individually, which is seemilgly impossibe. Intensive therapy can predispose to episodes of hypoglycemia, which can infact be fearful for the individual experiencing them itself. This fear, can then hamper the ability of clinicians to assist the client, in achieving their apt glycemic goals. It is reported that a six-fold increase in deaths due to diabetes has been attributed to patients experiencing severe hypoglycemia in comparison to those not experiencing severe hypoglycemia. Repeated episodes of hypoglycemia can lead to impairment of the counter-regulatory system with the potential for development of hypoglycemia unawareness.1

The lack of adequate Indian Data on Hypoglycemia unawareness incited the need for this study.

Materials and Methods: This prospective observational study, was conducted utilising Modified Clarke’s questionnaire.2 After clearance from the Ethical committee of AJIMS and RC, 92 consenting subjectes were recruited.

Results: Of the 92 participants in the study, 72 subjects were found to have hypoglycemia unawareness based on a validated questionnaire. Individuals with a higher level of education, were able to interpret their symptoms to be those of hypoglycemia. Most individuals are aware that eating something when recognizing a first sign of low sugars, will help alleviate symptoms, the next step being reducing their insulin dose. Almost 40% of the study population worried about having a severe hypoglycemia in public.

Diabetes, a lifestyle disorder due to disarrayed glucose metabolism, i.e. defects in insulin secretion, insulin action, or both. It is quickly catching on in India, with more than 77 million diabetic individuals currently diagnosed with the disease.3

Hypoglycemia, espcecially iatrogenic, is a fearful occurrence in individuals with diabetes, and it impairs it’s management. Reduced neurogenic symptoms, a key feature of hypoglycemia unawareness, are largely the result of reduced sympathetic neural responses to falling glucose levels.4

In view of no available statistics in the population in this area, it would be not only interesting, but imperative to conduct a study to determine the incidence of the same and whether or not symptoms occur during the episode of hypoglycemia. The role of diabetes education in this juncture is very important. Explaining to patients about hypoglycemia symptoms, correction and possibility of HAAF in individuals with long standing diabetes can help reduce it’s occurrence and therefore reduce morbidity in patients who insist of relaxed glycemic goals in fer of severe hypoglycemia.

This prospective interventional study was conducted after ethical committee clearance, in AJ Institute of Medical sciences and Reseach Centre. 92 consenting individuals were recruited on a basis of a score, achieved, from Modified Clarke’s Questionnaire to reveal clinically, Hypoglycemia unawareness. Individuals with hepatic, renal or other known autonomic disturbances were excluded, as were pregnant ladies and individuals on beta blockers.

The collected data was analyzed using mean, mode for demographic data and frequency percentage for the analysis of the clinical data. Statistical analysis was done using SPSS software version 23.0. A ‘p’ value less than 0.05 (p<0.05) is considered significant. The various measures of central tendencies and graphical representations were used to analyze the data. 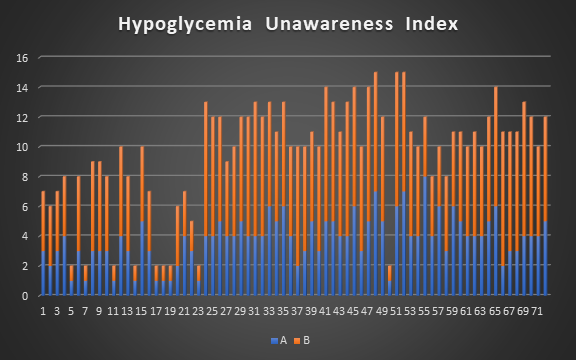 Behavioral modifications with respect to hypoglycemia

Although an individual with diabetes adapts multiple measures to prevent hypoglycemia, the most common behavior practiced by individuals with diabetes was to consume something when they feel the first sign of low sugars, followed by reducing their insulin dose. The least common strategy was to keep their sugars on the higher side. 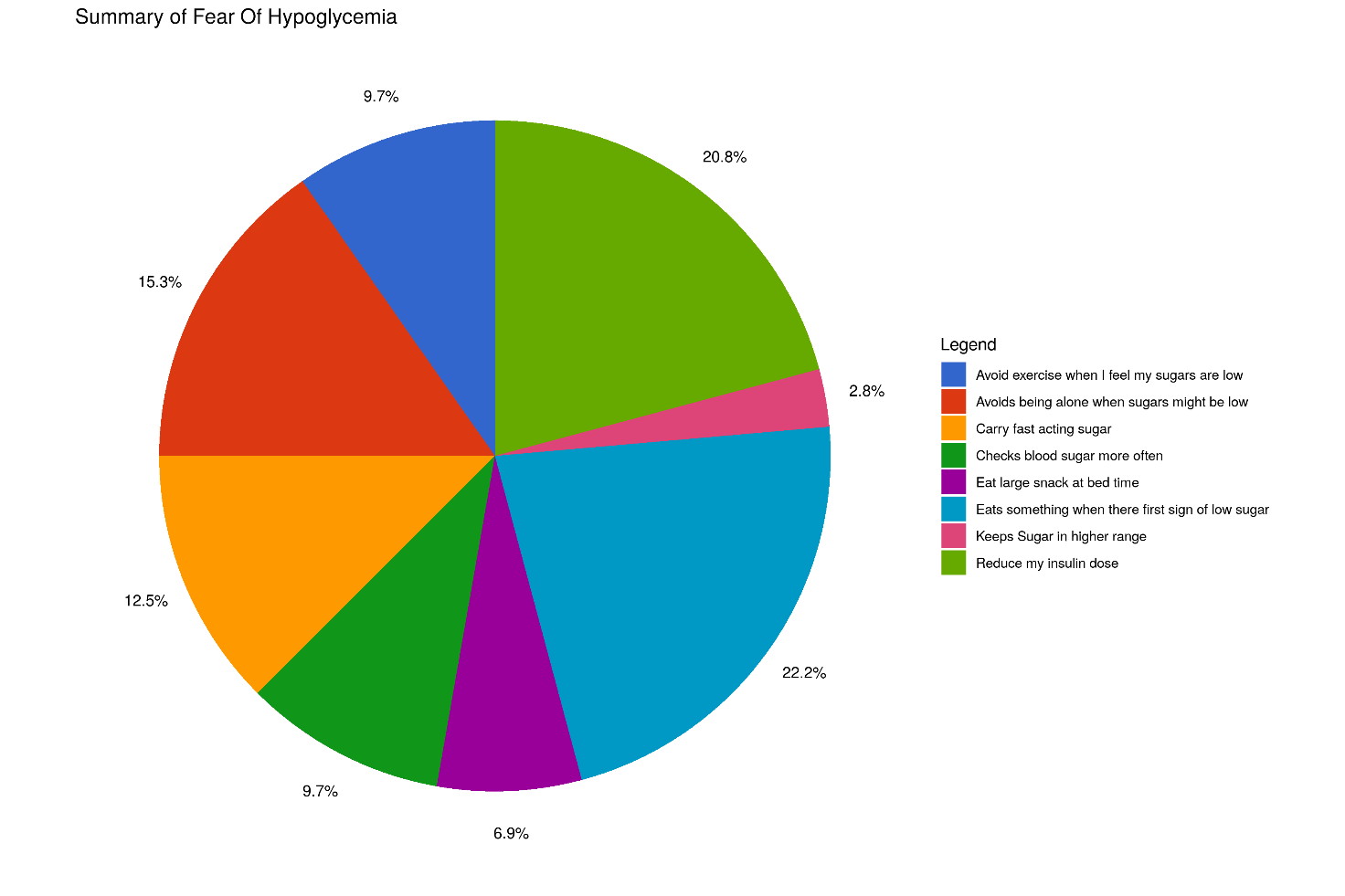 Concern about not being able to self correct low sugars

Only two individuals were worried about not having any aid to self correct low sugars if they have symptoms. 54% were not at all worried about being able to reach for sugars when having symptoms of low sugars. This on further prompting was found to be due to lack of awareness about how to self correct - use of glucose, checking with glucometer etc. 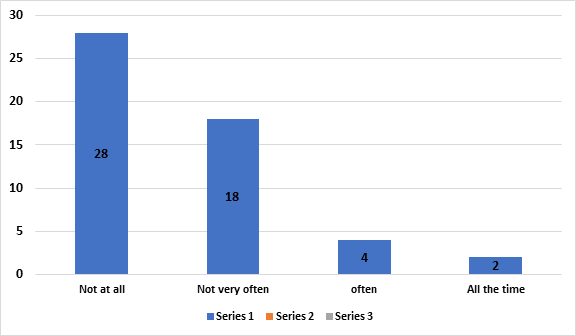 39% of the population with hypoglycemia were not concerned about having an severe hypolycemia in public, whereas 8% were often worried that they may feel dizzy due to low sugars. 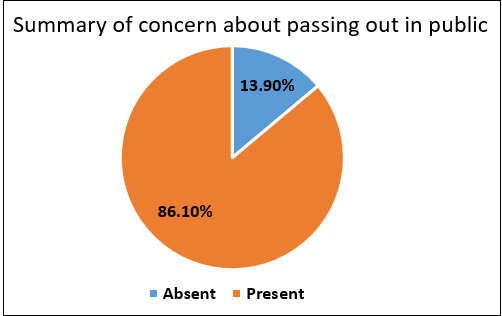 Concern about having low sugars

Concern about having low sugars while asleep 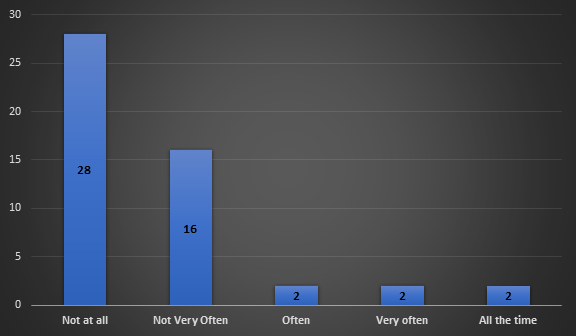 Hypoglycemia is an inevitable part of diabetes mellitus. Clinically the greatest risk occurs after failure of cerebral glucose supply causing progressive cognitive impairment, confusion and unconsciousness. Psychologically, it is fearful, and the burden of having to deal with hypoglycemia in public is all the more difficult to cope with.

It is known, based on several studies that hypoglycemia can have a major impact on the quality of life. The well-being could be affected by direct effects of hypoglycemia and also indirectly from fear of recurrence.7, 8 As a result of fear, there is a tendency to modify behavior to prevent hypoglycemia, which may contribute to poor glycemic control and again attenuate their quality of life.6

Hypoglycemia can on the other hand, place an individual at risk of unpleasant situations resulting in social embarrassment.10, 11

This study has revealed the need for further evaluation on hypoglycemia unawareness in our population in India, and individualisd goals. Diabetes education must include recognition of and apt corrective measures for hypogycemia.

Overall, the conclusions drawn from this study are:

The limitations of the study were

The authors declare that there is no conflict of interest.

© This is an open access article distributed under the terms of the Creative Commons Attribution License Attribution 4.0 International (CC BY 4.0). which permits unrestricted use, distribution, and reproduction in any medium, provided the original author and source are credited.