Asok, Singh, Meetei, and Akoijam: Prevalence of nomophobia among college students in Bishnupur District of Manipur; a cross-sectonal study

Prevalence of nomophobia among college students in Bishnupur District of Manipur; a cross-sectonal study

Background: Over the last decade mobile phones have become the most pervasive devices, which have morphed into smartphones with advance features. Nomophobia, the fear of being without mobile phone, has become a growing concern especially among youth. This study aimed to assess the prevalence of nomophobia among college students in Bishnupur District of Manipur.

Materials and Methods: A cross-sectional study was conducted from 23rd December 2019 –23rd January, 2020 after ethical approval. A validated nomophobia questionnaire (NMP-Q) was used among college students. Data was entered in IBM SPSS version 21.0 and presented in descriptive statistics. Chi-square test was used to test the significance of association between proportions. A p value of < 0.05 was considered as statistically significant.

Results: 10.5% of participants had mild nomophobia. 60.4% had moderate nomophobia, 27.9% had severe nomophobia.

Conclusion: Nearly 9 out of 10 students were nomophobic. There was no association of nomophobia with socio-demographic characteristics like age, gender, current place of stay, type of family, family income, age of start of mobile phone use, number of mobile phones possessed, amount of money spent on recharge.

The term nomophobia, a portmentau of words no mobile phone and phobia is defined as the fear or worry at the idea of being without mobile phone or unable to use it. This relatively new construct is a situational phobia and refers to the discomfort or anxiety experienced by an individual due to the unavailability of a mobile digital service.1 Over the last decade, mobile phones have become the most pervasive devices, which have morphed into smartphones with advanced features. Today, the number of active mobile subscriptions in India is more than 1.15 billion and 7.5 billion globally. Smartphones have become a tool for much more than just phone calls and messaging. Because of many conveniences smartphones can afford, they have become integrated into our everyday lives and for many have become seemingly indispensible. Just as their functionality and capabilities are instantly increasing, so are the problems associated with mobile phones and their negative effects on individuals. There is growing concern regarding the potential negative effects these devices may have on mental health. Reports of research linking excessive use of smartphones with stress, anxiety, depression and other psychological ailments are becoming increasingly common these days.2 Among the students unregulated usage has caused distraction in their academic activities due to excessive time channeled to these devices. Acquiring gadget at a very young age and its dependence has provoked marked changes in the behavior and living pattern of youth, thus this emerging trend of excessive smartphone usage challenges the well-being of younger population. In this context, this study aimed to determine the prevalence of nomophobia among college students in Bishnupur district, Manipur.

Students aged below 25 years studying in colleges of Bishnupur.

Structured questionnaire which consisted of -

Prior to the study, permission was sought from the college authorities. Participants were approached in their respective colleges during the college hours (9 am- 4pm). After explaining the purpose of the study an informed verbal consent was obtained from them. Data was collected using a self administered pre-designed structured questionnaire. They were given 30-45 minutes to fill the questionnaire. After collecting, questionnaire was checked for completeness and consistency. Approval was obtained from the Research Ethics Board, RIMS, Imphal before the beginning of the study. Anonymity of the data collected was ensured by not collecting any names of participants To maintain confidentiality collected data were kept locked, and was utilized only for the purpose and not disclosed to anyone outside the research team.

Total number of participants included in the study were 323 of which, 43% were male and 57% were females. Table 1 shows the distribution of participants by their socio-demographic characteristics. Out of total participants 25% of participants were below 20 years and 75% were above 20 years. The students were selected from arts and science course and only 8% of them were staying in hostels. 64% of the participants live in a joint family while 36% in nuclear family.

Distribution of partcipants by their socio-demographic characteristics (N=323)

Distribution of participants by their mobile phone usage

Distribution of participants by the hours of usage of mobile phones 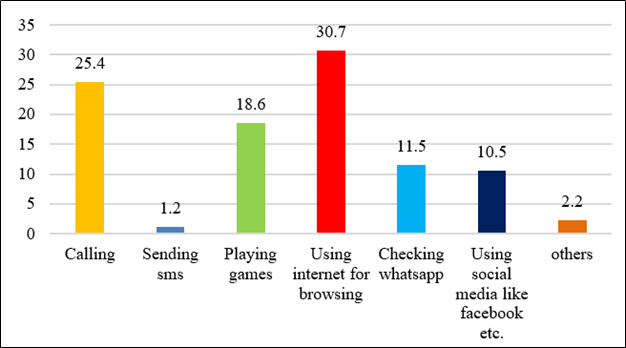 Figure 2 shows the distribution of participants according to the reason for the most frequent use of mobile phones. Majority of them used it for browsing internet, calling and palying games.

Distribution of participants according to severity of nomophobia (N=323) 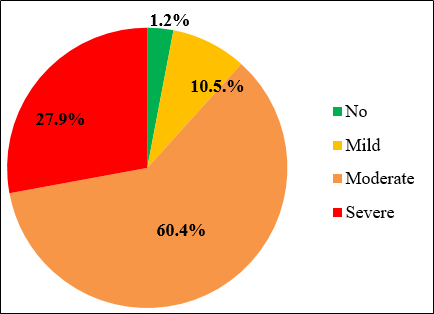 Association of nomophobia with features of mobile phone usage (N=323)

Technologically smart phones have eased many of the daily activities but with few negative consequences which have to be explored. Sleep quality worsens with increasing levels of smartphone dependence.4 Signs of distress and depression occur when the individual does not receive any contact through a mobile phone. Attachment signs of a mobile phone also include the urge to sleep with a mobile phone.5 Overusing a mobile phone for day to day activities such as purchasing items can also cause individual financial problems.

In the present study, the prevalence of nomophobia was 98.8% which is nearly similar to a study conducted by Harish B et al. in Karnataka in 2018 where the prevalence was 99%.6 Among those who had nomophobia 10.5.%, 60.4% and 27.9% had mild, moderate and severe nomophobia which is almost similar to the study conducted by Kar S et al. at Bhubaneswar in 2016 where the moderate and severe 70.1% and 21.1% respectively.7

In our study 52% of the students agreed that using mobile phones affect their academic performance in a negative way which is higher than the findings of the study conducted by Monika P et al. in 2016 in UP where 39.5% of the students agreed their academic performance to be poorer due to spending more time on mobile phones.3 There was no association between nomophobia and gender in the present study which is similar to the study conducted by Pavithra MB et al in Bangalore in 2015.8 There was no association between age and current place of stay (home/hostel) which was similar to the study findings of Madhusudhanan M et al in Kerala in 2017.9

In our study we found no association of nomophobia with type of family nor family income. There was also no association of nomophobia with age of start of mobile phone use, number of mobile phones possessed, amount spend per month for recharge, suggesting that the state of fear or anxiety at the idea of being without mobile phone was linked to one’s own psychological well-being and cannot be attributed to factors like characteristics of mobile phone usage. Strength of this study is that it is one of the very few studies done on this topic in NorthEast India and response rate of the study was high (98%). Limitation of this study could be the recall bias in ascertaining certain variables as it was self-reported.

More than one–fourth of the participants had severe nomophobia. There was no association of nomophobia with socio-demographic characteristics like age, gender, current place of stay, type of family, family income, age of start of mobile phone use, number of mobile phones possessed, amount of money spent on recharge. As with other technological advances, over reliance and overuse can have unintended deleterious effects on other aspects of life. Awareness programmes should be organized frequently in colleges to educate the youth about mobile phone addiction and its harmful effects. Further research is required to investigate more in depth the psychological aspects and solutions for nomophobia.

The author(s) declare(s) that there is no conflict of interest.